To see how our industry is continuing to protect and serve our clients and communities through the COVID-19 pandemic and beyond, watch this video

Title Industry Responds to COVID-19: Our Title Is Protection

Title insurance professionals take pride in protecting their customers by ensuring that their home is theirs when they make one of the biggest financial decisions of their lives. In the midst of the COVID-19 pandemic, the title insurance industry has stepped up even more to help their communities. Whether it’s volunteerism, or innovation to get deals closed during this time of social distancing, the title industry is here to provide protection today, tomorrow, and forever.

Will bidding wars continue? Will home prices stay elevated? Will home buyer demand remain strong? Heading into the final quarter of the year, economists are optimistic about the market’s direction considering its unpredictability since the beginning of the pandemic.

“I expect an unusually busy fall season,” said George Ratiu, realtor.com’s chief economist. “Sellers are putting homes on the market. Normally, this activity happens early in the spring.” Buyers continue to purchase homes for sale at a frantic pace. Eighty-nine percent of homes sold in July were on the market for less than a month, according to NAR’s data.

Buyer demand likely will remain strong, especially as mortgage rates stay near record lows. “The fear of missing out on what could be a once-in-a-lifetime deal will likely entice additional buyers,” realtor.com® reported.

Supply is also an issue. According to the National Association of Realtors, the U.S. has underbuilt its housing needs by at least 5.5 million units over the past 20 years. That’s a stark comparison to the previous housing bubble in 2008 when overbuilding was the issue.

“So we’ve got a boost in demand that’s due to record low mortgage rates and we’ve got a shrinkage of supply,” said, Frank Nothaft, Corelogic chief economist. “Between more demand and less supply, prices are up and they’re up at the fastest pace since the 1970s.”

As a result, home buyers likely will still face intense competition. “Don’t expect deals if you are house hunting in the most desirable part of a market or competing for a particularly nice house,” Ali Wolf, chief economist at Zonda, a building consulting firm, told Realtor.com®. “Homes that stand out for one reason or another are still flying off the shelf.”

For other stories and industry news, read the latest edition of ASSURANCE. 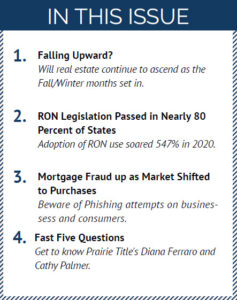